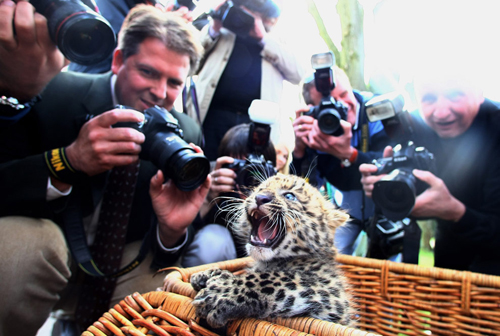 Another excellent set of photos on The Big Picture today, focussing this time on animals in the zoo. As always with The Big Picture, there’s a real (if subtle) sense of a narrative running through the post, thanks to the ordering of the shots. I couldn’t help but be grabbed by this one of a six-week-old North Chinese Leopard from Hagenbeck Zoo in Hamburg, Germany.

It makes a very strong impact thanks to the strength of the subject. At first it’s funny and cute, thanks to the disparity between the dinky little cub, doing his best to snarl, and the photographers. The wicker basket makes him appear all the sweeter, as if he’s a pet on a picnic or something.

Look at it longer though and there’s a toughness to it – there’s a predator’s cruelty in the leopard’s eyes. Cub or not, there’s no mistaking the fact he’s (supposed to be) a hunter and a killer, which makes the way he’s trapped quite poignant. Increasing this sense are the partially obscured faces of the photographers leering out of the blown, smudgy white highlight on the right. The super-saturated light gives a feeling, I think, of the outside forces shaping the cub’s life.

Other highlights from the post include shot 23, which features some very clever use of shadows and picture 26 which is a flat out super composition – the human hand makes it a much more interesting shot than 27, despite the fact that 27 is, on the surface, more action packed.

This is the past

The last song stuck in my head