“You know, when they forced Khruschev out, he sat down and wrote two letters to his successor. He said – ‘When you get yourself into a situation you can’t get out of, open the first letter, and you’ll be safe. When you get yourself into another situation you can’t get out of, open the second letter’. Well, soon enough, this guy found himself into a tight place, so he opened the first letter. Which said – ‘Blame everything on me’. So he blames the old man, it worked like a charm. He got himself into a second situation he couldn’t get out of, he opened the second letter. It said – ‘Sit down, and write two letters'” – An old anecdote, quoted in Traffic

Barack Obama needed a response to the loss of Teddy Kennedy’s old seat to the Republicans, and while he talked about being more direct with the voters, and, as per the advice from Khruschev (or was it Stalin?), he landed a punch on the old guy as well:  “Here’s my assessment of not just the vote in Massachusetts but the mood around the country — the same thing that swept Scott Brown into office swept me into office…. People are angry and they are frustrated. Not just because of what’s happened in the last year or two years, but what’s happened over the last eight years.”

Fine stuff, but it’s the first part of Obama’s reply that’s really interesting – and perhaps shows his true character, an incisive, but remote observer comfortable with theory, even at his own expense. To be a compelling politician, to achieve his remarkable victory, he needed to be an expression of cultural forces, views and desires.

So what then, is David Cameron – who at times has tried to harness some of the Obama magic – an expression of?

It’s very striking. It’s direct and engages the viewer. As well as making you think of Cameron, it makes you think of other political leaders, and given their lack of popularity with the public, this is a good thing for the Conservatives. The poster relies a lot on your impressions of Cameron though, as much of the meaning is implied. There aren’t many words, and the first sentence is surprisingly elusive  – what exactly is meant by “like this”? The second line is fine-but-bland; which politician from any of the major parties wouldn’t say that? So it’s just the image of Dave – and it seems to work very well – he looks right at you, open, calm, but resolute too. He can be trusted. He trusts you, too.

In fact, it’s quite clear how little the words matter once you start messing around with them, as you can with the brilliant Make Your Own David Cameron poster site. It allows you to easily swap out all the text – both poster and party slogans and easily use your own.

Clearly, the first thing you’re going to do with these powers is to take the piss:

See? The image doesn’t look inappropriate at all. Here, Dave looks… well, a bit like a trendy Dad who’s read a lot of parenting columns in the quality press. He’s not going to get mad and shout. He’s being even, fair, talking to you like an adult. He’s not losing his temper with you. But he’s being firm.

All of which makes the fact the tie has been nicked even funnier.

So what next? Well, how about Dave dispensing the wisdom of…. The Matrix:

Again, not exactly a boiling cup of dissonance is it?

Nope, he looks… well, as bland and impassive as all the other actors in the Matrix. If you had one criticism, it would be that his suit should be black.

So… well, let’s try and push it further. How about one of the best moments from The Wire? You can see it for yourself 40 seconds into this spoiler heavy compilation of Wire goodness – but it sees drug gang boss Stringer Bell attempting to remodel his crew along the lines of a real business. In the show it’s very funny, creepy and prefigures a lot of what will happen to Stringer. How does it sound coming from Dave? 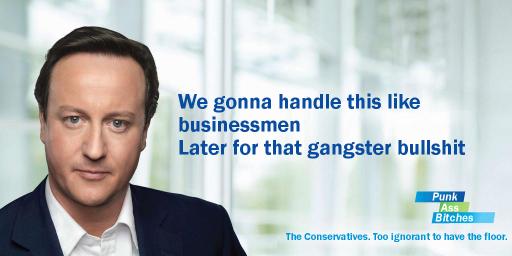 But it still doesn’t look completely wrong. And that, in itself is deeply wrong.

So why is the poster so adaptable? In part because it never makes any attempt to be saying anything other than “Hey, you like David Cameron, right? Look, he’s so nice and reasonable. At least he’s not the other guy!” It’s also because his face has been Photoshopped past the point of no return and thrust fully into the uncanny valley. It looks like some kind of pink, fleshy mask. The reason his expression looks right with pretty much whatever text you want to put next to it is because there is no expression. Literally then, the poster may as well just say:

Which is to say, it’s not a very good poster. It reinforces the dangerous idea that mainstream politicians are all the same (something that for a portion of the electorate will mean greater interest in fringe, loony parties). It also doesn’t serve the Conservatives well, because it moves the discussion away from not just ideas and policy but any expression of meaning at all. Morally and semantically horrible, of course, and yes, it’s just one poster campaign, but if what it embodies becomes a wider trend of the campaign, it could also have political ramifications, in terms of landing Cameron in parliament with a very small majority.

Thanks to Metafilter for the link, and the first two made-up posters – the last is mine. If you want to see more, the MeFi thread is stuffed with them.