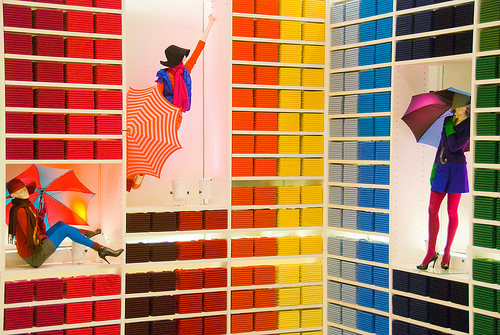 It’s always interesting to look at the choices a successful business makes, particularly, choices that are conscious limitations. So-and-so inc expanding into a new area or launching a new copycat product is fairly dull. Looking for new markets, consumers and money is a given in a modern economy. In contrast, a company opting to depart from received wisdom by not doing certain things, skipping certain processes, provided it’s not doing it for cost-cutting measures, is fascinating.

I’ve found myself reading a couple of articles about clothes retailers in the last 24 hours. One is about a place where I buy 90% of the stuff I wear, the other is a shop I can’t stand. Respectively, these shops are Uniqlo and Abercrombie & Fitch. Both are the centre of articles that have much to say about branding, management and choices.

A cursory sweep through the two pieces reveals both Unqilo and A&F have a founder/CEO who exerts strong control over the company:

“Tadashi Yanai, the founder and owner of Uniqlo, is the richest man in Japan, worth over $9 billion… [he is] clearly obsessed with control, [but] is also a deeply pragmatic manager, and fascinated by failure. In 2005, he announced a reversal of strategy for international expansion… Uniqlo works quickly, and the transformation was surprisingly fast. Uniqlo designed and built the Soho store in about eight months, with 150 workers working twelve-hour shifts, seven days a week.”

“Mike Jeffries, the 61-year-old CEO of Abercrombie & Fitch, says “dude” a lot… I got a firsthand look at his perfectionism in action when he invited me along for the final walk-through for the Christmas setup of his stores… Jeffries paused in front of two mannequins and shook his head… He stared at the jeans on the female mannequin. “The jeans are too high. I think she has to be lower.” A guy named Josh got down on his knees and started fidgeting with the jeans, trying to pull them down so they hung to the ground.”

However, differences in their approaches are soon apparent. A&F is a typical fashion retailer; it sells a very specific look, and builds up the emotional pull of that look via heavy, distinctive branding that appropriates a series of familiar ideas, images and style cues from the past. Uniqlo is quite unusual; unlike other fast fashion stores, customers expect to wear the clothes until they’re worn out and instead of building stores that are like sets for the movie of the brand, they focus on the way the clothes should be folded and the customer’s credit card is handed back to them. While both A&F and Uniqlo strictly enforce a personality, A&F seeks to sell a certain, specific fashion and style, whereas Uniqlo sells… well, it seems glib to say ‘clothes’, but that doesn’t seem far off:

“To Jeffries, the “A&F guy” is the best of what America has to offer: He’s cool, he’s beautiful, he’s funny, he’s masculine, he’s optimistic, and he’s certainly not “cynical” or “moody,” two traits he finds wholly unattractive… Much more than just a brand, Abercrombie & Fitch successfully resuscitated a 1990s version of a 1950s ideal, the white, masculine “beefcake”… A&F aged the masculine ideal downward, celebrating young men in their teens and early 20s with smooth, gym-toned bodies and perfectly coifed hair. While feigning casualness (many of its clothes look like they’ve spent years in washing machine, then a hamper), Abercrombie actually celebrates the vain, highly constructed male.”

“Like the mass-fashion brands, [Uniqlo] delivers a low-cost product that shares qualities of high-end retail. “Uniqlo is a bit of a different animal,” says Luca Solca, who covers retail for Bernstein Research. “And what’s different about Uniqlo is that they have chosen fabric, rather than fashion, as the area where they want to excel. Uniqlo has sixteen takumi, or textile “masters,” on staff, none with less than twenty years’ experience. They specialize in areas like dyeing or sewing, and work with more than 70 factories, mostly in China. A typical order will be around a million units of denim, fleece, or cashmere… [and it] further increases its buying power by offering a smaller selection of fabrics, across a more limited selection of clothes styles, than most other retailers. Uniqlo disguises the limited variety of products it makes by offering them in almost every color imaginable.”

In the shadow of this conversation, anyone with an interest in technology will surely by now be itching to put their hand up and say “oooh! Apple!” Because of course, the Jobs-mob famously don’t bother with focus groups and they love to design products that lack the tick-box or expected features such as memory card readers, USB ports and support for Flash.

I suspect reading these two articles, Apple detractors would say the company is closer to A&F – nut-job CEO, obsessed with style who wants to impose an embarrassing and deeply inauthentic fashion lead orthodoxy – whereas those more favorably disposed towards Apple will surely see something of Cupertino’s approach (and aesthetic) in the Uniqlo way of doing things. This is true for both the positive and negative aspects of Uniqlo, from its commitment to quality (selling jeans that use selvage denim) to the slightly creepy way the employees are indoctrinated (they have six stock phrases to speak, for instance).

What I like about Uniqlo’s approach is that while it’s clearly a fashion retailer, it’s not fixated on selling a certain style, but focusses instead on what lies beneath that: fabric, quality, fit and use, attaining excellence in these areas by intentionally selling fewer items, something which runs contrary to the success of fast fashion chains such as TopShop. This puts me in mind of the (internet) truism that states newspapers made the mistake of thinking they were in the business of printing on paper, when really, they were in the business of providing people with information, perspective and entertainment.

One thought on “Fashion versus Clothes (and Apple, of course)”

This is the past

The last song stuck in my head